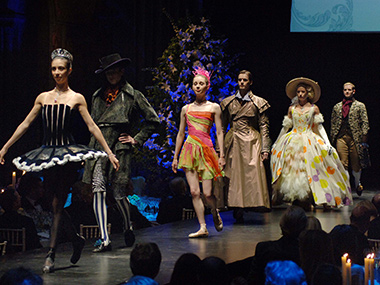 From Madame Tussauds to Casino Royal, and from Cinderella to The Secret Garden – for over a decade we’ve worked with the Muir Maxwell Trust to create gloriously themed charity balls, dinners and fund-raising events where ‘everything is possible’ has been our mantra.

The gorgeous Angel Ball at Prestonfield House, Edinburgh, in 2006, was our first collaboration. Raising over £500K on the night it confirmed that our strategy – delivering an over-the-top extravaganza to raise significant funds in just one night from a carefully selected audience – was a winning formula.

May 2007 saw the fashion capitals come to Edinburgh (thanks to Sarah Murray of Jane Davidson) as Missoni, Ben di Lisi, Collette Dinnigan, La Perla and Diane Von Furstenberg graced our audience with their autumn collections for The Most Beautiful Night of the Year to a backdrop of entertainment from Scottish Ballet, Broadway and the inimitable Toyah Wilcox. Dinner was prepared by Michelin-starred chef, Martin Wishart, the evening compered by Angela Rippon, Christopher Biggins and Lorraine Chase, and golf’s Colin Montgomerie personally auctioned the prize he’d donated!

Over the years, with the help of Lizzie Bell Interiors, we’ve transformed spaces across the UK spaces across the UK into awe-inspiring settings for the Trust: the sensational Venetian Masked Opera Ball at The Dorchester, London, in 2007; Casino Royale at The Sheraton in 2008 with Martin Wishart once again at the helm in the kitchen; the Night at Madame Tussauds dinner in London 2009 and our delightful Cinderella Ball at The Savoy, London in 2011.

In 2011 we collaborated with Fettes School to create a wonderful Alice in Wonderland inspired garden party and in 2012 we joined forces with St Andrews University Charity Fashion Show to launch the inaugural FS2012 Secret Garden gala dinner at Mansfield Traquair in Edinburgh.

On every glittering occasion we have faithfully, imaginatively and adventurously immersed our theme at every level to delight our guests, and the generous contribution of time and talent from true professionals, including Christopher Biggins, Fred MacAulay, Rory Bremner, Angela Rippon and Natasha Kaplinsky, has been inspiring and humbling.

“Once again, the ECS team did an outstanding job. It’s great to know that I can trust them to deliver and delight in equal measure. I honestly believe that without ECS, MMT could not have these events.”

TALK TO US ABOUT YOUR EVENT